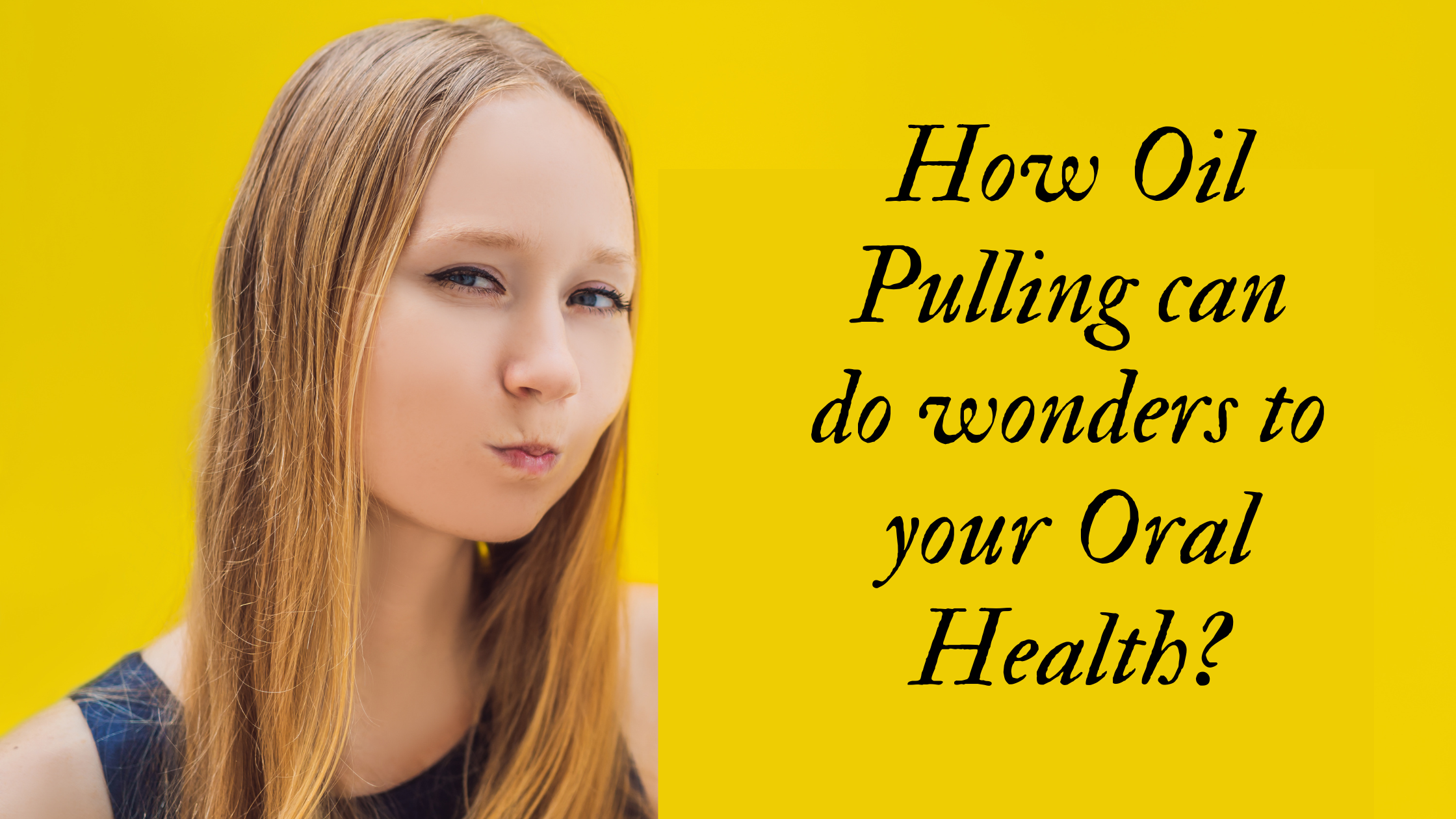 Do you know that the ultimate ingredients that can give you a salubrious lifestyle are kept in the conditioners of your kitchen? Well, among that oil is one such thing, which has got numerous benefits within it. Oil is one ingredient that can be beneficial for your hair, body, and even on your mouth too. Yes, you read that right, oil can do wonders for your oral health too.

Your smile radiates, information about your oral health and your overall health too. In order to maintain that perfect oral health, oil pulling is one technique that helps in maintaining your oral health. Wait now a simple question might arise in your mind, what this oil pulling is and how did this come?  Oil pulling is a technique that dates back to ancient India. This is a traditional folk remedy that was practiced during ancient times. It is said that oil pulling helps in curing more than thirty systemic diseases when it is practiced regularly and as directed. Because of the occurrence of side effects to modern medicines and oral hygiene products, people are increasingly attracted to complementary and traditional practices. Oil pulling offers several benefits to your oral health, and not just that it also provides benefits to your overall health too. This article is all about oil pulling and the wonders plus the benefits that it can do to your overall oral health.

The correct method of doing oil pulling is in the morning, on an empty stomach before brushing your teeth, and it should be taken care that you don’t end up swallowing the oil.

Oil pulling may be beneficial for reducing the number of bacteria in the mouth, improving gum health, and preventing issues like bad breath, tooth decay, and cavities. It’s also simple and easy to add to your routine. This is an ancient practice that involves the swishing of oil in your mouth to remove bacteria and promote oral hygiene. Oil pulling is associated with Ayurveda, which is the traditional medicine system of India.

Studies have suggested that oil pulling can help in the killing of the bacteria in the mouth and improve your oral health. Some alternative medicine practitioners also claim that it can help treat several diseases. While some types of oil also contain properties that can naturally reduce inflammation and bacteria to promote oral health.

Oil pulling is a traditional oral health practice that has its origins in ancient India as mentioned above. In recent years, this practice has received significant notification regarding its reported health benefits among them, the removal of harmful bacteria from the mouth. Is it really true that oil pulling, has oral health benefits? Are the health claims true? Just what does this regimen involve? Should you try it for getting well-maintained oral health? Keep on reading the article and at the end, you will have all the questions answered.

What is oil pulling?

Oil pulling is the daily practice that you can do by swishing about a tablespoon of coconut oil in your mouth for up to 20 minutes and then spitting it out. This technique has got reported health benefits that include fresher breath, fewer bacteria in the mouth, better saliva production, and more moisture retention in the gums and gum lines. The technique works by bringing oil, a fat, into contact with cells in your mouth, which are covered with a fatty membrane. During oil pulling, these cells and the oil adhere to each other. Spitting out the oil also expels the microorganisms.

What happens when you oil pull?

For several centuries, people have been using this practice every day in order to prevent tooth decay, bad breath, bleeding gums, throat dryness, and cracked lips. Enthusiastic proponents of modern oil pulling claim it cures everything from hangovers and diabetes to acne and hence it is not only beneficial for your oral health but also for your overall health too.

How to oil pull in the correct way?

If you want to give the practice a try, take these steps in order to do oil pulling in the correct method:

Repeat these steps a few times per week or up to three times daily. You may also want to work your way up, starting with swishing for just 5 minutes and increasing the duration until you’re able to do it for a full 15–20 minutes. For best results, the most recommended thing to do is early in the morning on an empty stomach, though you can adapt several other timings based on your personal preferences.

What are the benefits of oil pulling?

Till now you have known what oil pulling can do and how helpful it is to do. Now you should know what the benefits that are connected to it are.

1. Can reduce harmful bacteria in your mouth:

There are approximately 700 types of bacteria that can thrive in your mouth and stay, and up to 350 of them may be found in your mouth at any given time. Certain types of harmful bacteria can lead to problems like tooth decay, bad breathing, and gum diseases.

Another study found similar results. It had 60 participants who were asked to rinse their mouths using either mouthwash, water, or coconut oil for 2 weeks. Both mouthwash and coconut oil was found to reduce the number of bacteria found in saliva. Thus the decreasing, number of bacteria in the mouth can help to support proper oral hygiene and prevent some conditions to get worse.

Halitosis, which is also known as bad breath, is a condition that affects an estimated 50% of the population.  There are many potential things that cause bad breath.

Some of the most common include infection, gum disease, poor oral hygiene, and the coating on the tongue, this takes place when bacteria become trapped on the tongue.

Treatment typically includes the removal of the bacteria, either with the help of brushing or by using an antiseptic mouthwash.

Oil pulling may be used as a natural alternative for the reduction of bad breath and could be as effective as traditional treatments.

Cavities are a common problem that takes place from tooth decay. Poor oral hygiene, consuming too much sugar, and a build-up of bacteria can all cause tooth decay, which leads to the formation of holes in the teeth that are known as cavities.

Plaque can also result in cavities. Plaque forms a coating on teeth and is comprised of bacteria, saliva, and food particles. The bacteria begin to break down the food particles, which form an acid that destroys tooth enamel and causes tooth decay. Several studies have found that oil pulling can help reduce the number of bacteria in the mouth, which can help in the prevention of tooth decay.

In fact, some research has also found that oil pulling may decrease the number of harmful bacteria that are found in saliva and plaque as effectively as a mouthwash. Decreasing these strains of bacteria through oil pulling could help in preventing tooth decay and reduce the risk of cavity formation.

Gingivitis is a type of gum disease marked by red, swollen gums that bleed easily and pain too.

The bacteria that are found in plaque are a major cause of gingivitis as they could cause bleeding and inflammation in the gums.

Fortunately, oil pulling may be an effective remedy for improving gum health and also reduces inflammation.

It works primarily by decreasing the harmful bacteria and plaque in the mouth that contribute to gum diseases.

Thus using certain oils which has anti-inflammatory properties in it like coconut oil may also aid by reducing the inflammation associated with gum diseases.

5. May have other benefits:

That said, the anti-inflammatory effects of oil pulling may have a beneficial effect on certain conditions that are linked to inflammation. While no studies have given an evaluation that the effectiveness of oil pulling on these conditions, it may be a possibility given its potential to relieve inflammation.

Furthermore, there is no correct evidence that proves that oil pulling could be a natural way for whitening your teeth. Some claim that it’s able to pull stains from the surface of teeth, which results in a whitening effect, although there is no scientific research to back up this belief.

6. Cheap and easy to add to your routine:

Oil pulling is one such thing that can be done on a daily basis because it is simple to do and it can be done easily by incorporating it into your daily regimen.

Additionally, it requires just one ingredient that can be easily found right in your kitchen, so there’s no need to buy anything.

Traditionally, sesame oil has been used for oil pulling, but other types of oil can be used as well to do this technique.

For example, coconut oil possesses strong anti-inflammatory and antibacterial properties that can be especially useful for oil pulling. Olive oil is another popular choice thanks to its ability to reduce inflammation.

To begin with, set aside just 20 minutes each day for oil pulling and use the extra time to multitask around home, all while improving your oral hygiene.

What oils are best for oil pulling?

Many organic oils such as sunflower oil, sesame oil, and coconut oil hold different benefits especially if it is cold pressed, though refined oil also works in “pulling” the bacteria, viruses, and protozoa from the oral cavity. Since Tran’s fats are absent in the cold-pressed oils when compared to commercial oils which are extracted from strong petroleum-based solvents; oil pulling is ideally performed with cold-pressed oils. Among all the oils sesame oil is documented to be the preferred oil for practicing oil pulling due to its various benefits. Sesame oil and sunflower oil has been found to reduce plaque-induced gingivitis. The root of Sesame consists of chlorosesamone which has antifungal activity. Also, polyunsaturated fatty acids present in sesame oil reduce free radical injury that occurs in the oral cavity.

Are there any risks with oil pulling?

The most concerning risk come from potentially swallowing the oil hence due to this reason why you should never swallow oils, however, this should only cause minimal side effects. Since oils used for oil pulling are often used in cooking, they’re edible and safe, and even if it is accidentally swallowed while swishing it might end up causing minimal side effects.

By now you have come to know the benefits of oil pulling, and the advantages that it could have for your oral health. Though if you include oil pulling on your daily oral hygiene, you need to be sure that other than this brushing twice a day and flossing regularly are needed to maintain a proper oral health.