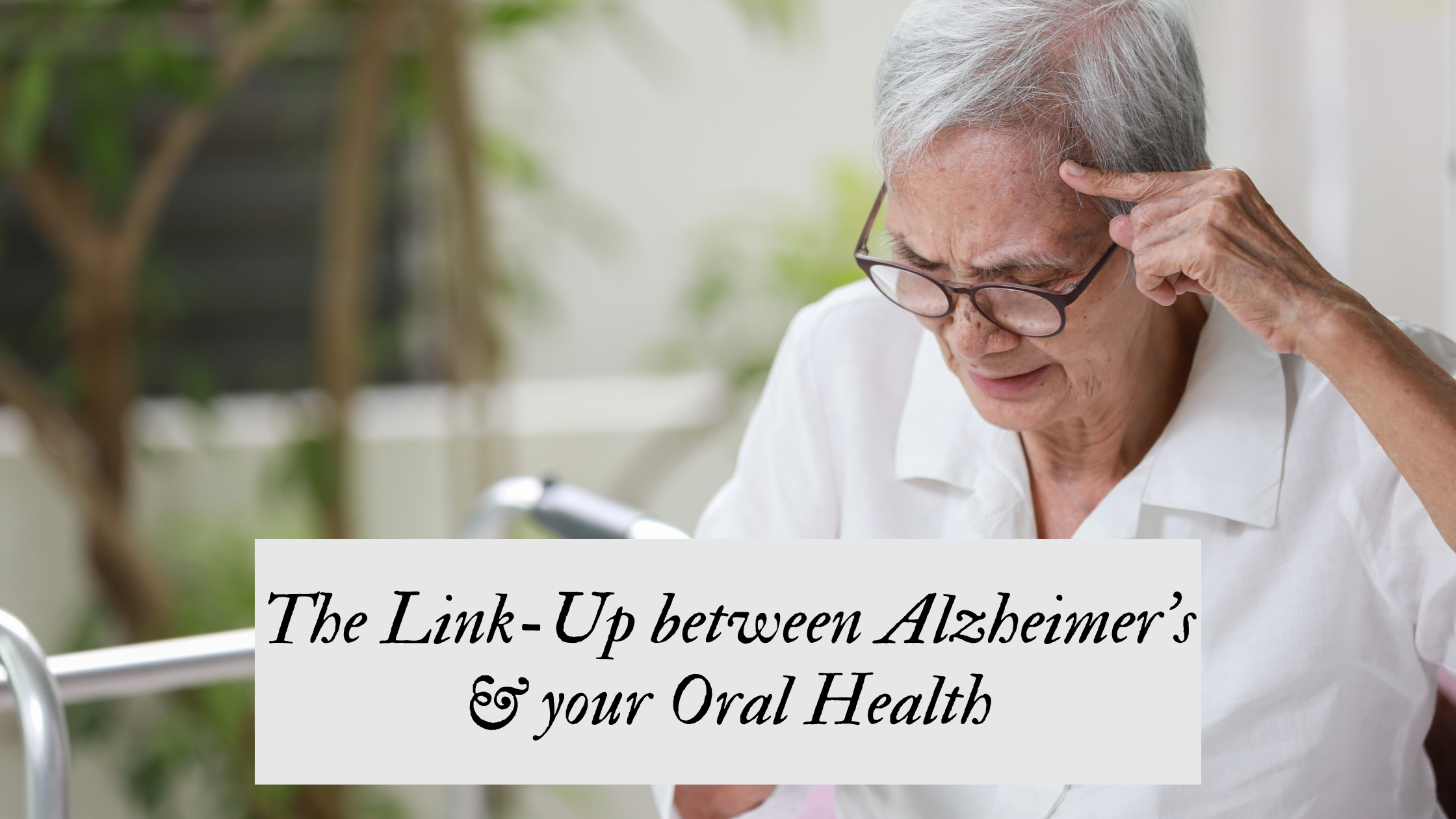 Your beauteous smile captives everyone around you, it is a very vital thing to maintain your oral health. Your well-maintained oral health has a great impact on your overall health and your confidence too, and it can also have other implications for your life too. There is a correlation between oral health and other health conditions too. Well, one such serious connection exists between oral health and Alzheimer’s disease. A study was conducted which said that Alzheimer’s disease has a certain type of bacteria that is also linked to gum disease and gingivitis.

This progressively worsens multiple aspects of health over the passage of time, and there are different symptoms that can be seen which include, short-term memory loss to behavioral changes to loss of bodily functioning. Well, the actual cause of Alzheimer’s is currently unknown. One widely-accepted hypothesis proposes that Alzheimer’s is caused due the accumulation of misfolded proteins in the brain. Unfortunately, many drugs targeting misfolded proteins perform poorly in clinical trials, hinting that this hypothesis might be wrong. Misfolded proteins might be another side effect, not the cause.

What is Alzheimer’s disease?

How Oral Bacteria Leads to Dementia and Alzheimer’s disease:

A recent study conducted by scientists showed that the bacteria which cause gum diseases have a connection with the development of dementia, which includes Alzheimer’s disease. Gum diseases form when there is a build-up of plaque on your teeth and when this plaque gets piled up it is hardened and forms tartar. If this condition is detected in an earlier stage then it can prevent the detrimental effects on health. However if this is left untreated, then the patient is left vulnerable to much more serious health issues, this includes gum recession or tooth loss as this causes the bacteria to travel through the blood toward the brain, replicating the exact characteristics of dementia.

Alzheimer’s disease and its connection to poor dental health:

Studies have proved that those who have poor oral hygiene or don’t maintain good oral hygiene and have gum diseases are the ones who could be at a higher risk of developing Alzheimer’s than compared to the ones who have healthy teeth.

Researchers have discovered that there is a presence the presence of a bacterium which is called “Porphyromonasgingivalis” in the brains of patients who had dementia when they are alive. This is usually associated with chronic periodontal (gum) diseases.

This was further proved when the 10 brain samples from patients with dementia were donated for analysis by a scheme called “Brains for Dementia Research”, alongside the 10 brain samples from people who didn’t have the disease. By doing the examination of the different samples revealed the presence of the “Porphyromonas gingivalis” in the samples of the brains that were affected by Alzheimer’s disease.

How Alzheimer’s affects your oral health:

Every time the bacteria enter the brain, the studies conducted say that this could potentially trigger immune system responses, which cause the release of excess chemicals that can kill neurons. Researchers have recently published a new line of evidence which supports that the hypothesis that Alzheimer’s might be a result of an infection by the oral bacteria P. gingivalis. The bacteria produce toxins which are called gingipains that are found to accumulate in the brain of Alzheimer’s patients. The gingipains degrade human proteins, by giving rise to the infamous misfolded proteins. The researchers also developed chemical compounds that could neutralize gingipains.

The researchers also say that this activity could lead to symptoms such as confusion and deteriorating memory and these are the typical symptoms of Alzheimer’s disease.  Not just that, poor oral hygiene, leads to the growth of bacteria in the mouth and this also leads to gum disease, which can cause inflammation and this raises the risk of beta-amyloid plaques in the brain, which leads to dementia. As Alzheimer’s progresses in the brain, a person who is affected with dementia might easily forget to brush their teeth and they might also forget the importance of good oral health and its need.

Mouth care doesn’t just keep the mouth healthy and prevent oral problems. It also lowers the chances that someone with Alzheimer’s disease will get pneumonia. While some studies have shown that as many as half the cases of pneumonia among nursing home residents are caused due to the result of poor dental hygiene.

Some of the more common dental problems in older persons with Alzheimer’s disease are:

#1. Cavities: This is one of the most common dental problems, and if you don’t brush or floss your teeth on a regular basis, then bacteria and food can collect in your mouth and it also starts to get piled up after some days. This bacteria, or tartar, can build up and eat away the outer layer of the tooth, called the enamel this in the end leads to the dwindling of the tooth too. This makes holes in the teeth, called cavities. These usually happen in areas where plaque and tartar build up, such as the pits or grooves in the teeth. Once cavities reach deeper into the tooth, you might have a tremendous toothache too.

#2. Broken teeth or dental work: This can be minor or serious. If just the tooth’s enamel is chipped, then it’s minor. But if the break goes into the inner part of the tooth, called the dentin or the pulp, you should take your loved one to a dentist in the next few days as this could eventually end up causing a serious problem.

#3. Abscessed tooth: This is an infection inside the tooth’s pulp, which is the inner part of the tooth that is fused with blood vessels. From there, the infection starts to spreads to the gum. This is very painful. It’s usually caused by a cavity that spreads too deep within the tooth. This lets bacteria into its pulp layer. As the tooth tries to fight off the cavity, the pulp inflames and sometimes causes a toothache. Molars (the teeth in the back of the mouth) are usually the ones that form abscesses because it’s harder to keep them clean.

#4. Dry mouth: If your mouth doesn’t make enough saliva then it is getting dry. If you don’t treat dry mouth then it creates dry mouth and that can also lead to the formation of ulcers, sores, and cavities. It can also make you unable to taste things and have problems digesting food.

A person who is affected with Alzheimer’s, during the early stages focuses on prevention. Regular check-ups, cleaning, and flossing can easily preventthe need for extensive procedures later on, when the person with dementia may be less able to tolerate them.

During the middle of the disease and at the late stages of Alzheimer’s, oral health might become a more challenging thing to do out. As because the person may forget what to do with the toothpaste or how to rinse and brush, or may be resistant to assistance from others.

Well, if you also know someone who has been affected by Alzheimer’s then you can do the following things that are mentioned below:

#1. Providing short and simple instructions and explainingdental care by breaking directions into steps. “Brush your teeth” by itself may be a too vague thing to do. Instead, of doing that walk the person through the process. By saying: “Hold your toothbrush.” “Put the paste on the brush.” Then, “Brush your teeth.” This would help the patient to understand slowly the importance of brushing the teeth.

#2. Use a “watch me” technique this is one of the easiest things to do. Start by holding a toothbrush and show the person how to brush his or her teeth and let them see the technique of brushing. Or, put your hand over the person’s hand, by gently guiding the brush. If the person seems agitated or uncooperative, postpone brushing until later in the day.

#3. To keep the teeth and mouth clean,start very gently by brushing the person’s teeth, gums, tongue, and roof of the mouth at least twice a day, during the last brushing after the evening meal, and any night-time liquid medication. Allow plenty of time and find a comfortable position if you must do the brushing yourself. You need to be careful and try gently placing the toothbrush in the person’s mouth at a 45- degree angle so you massage gum tissue as you do the cleaning of the teeth.

If the person wears dentures, then rinse them with plain water after meals, and brushing them daily to remove food particles is an essential thing to do.  Clean the dentures and take them out for 4 hours every day as this helps in keeping the lining of the mouth healthy. Well, you need to remember that dentures require extra care, and each night, remove them and soak them in a cleanser or mouthwash for preventing the growth of bacteria and germs. Then, use a soft toothbrush or moistened gauze pad to clean the gums, tongue, and other soft mouth tissues. Now that you have known what you can do to maintain the oral health of patients who suffer from Alzheimer, well not just that you can also try out several other things such as:

#1. Trying different types of toothbrushes: You might find that a soft-bristled children’s toothbrush is an effective thing as it works better than a toothbrush than any hard-bristled adult’s brush. Or that a long-handled or angled brush helps anyone to use it effectively as it becomes easier to use than a standard toothbrush. Experiment until you find the best choice. Be aware that electric dental appliances may confuse a person who has Alzheimer’s.

#2. Flossing regularly: Most dentists recommend flossing daily besides brushing the teeth twice a day. If using floss is distressing to the person with Alzheimer’s, try using a “proxabrush” to clean between teeth instead.

#3. Be aware of potential mouth pain: Investigate any signs of mouth discomfort during mealtime. Refusing to eat or strained facial expressions while eating may indicate mouth pain or dentures that don’t fit properly.

#4. Working with the dentist: Finding the right dentist. Contacting your local dental society and finding the names of professionals who have had a better experience in working with people who had dementia or with elderly patients.

#5. Coordinate care: Provide the dentist with a list of all healthcare providers who are caring for the person with dementia, as well as a list of all medications. Certain medications can contribute to dry mouth and other oral health issues. Keep up with regular dental visits for as long as possible. This will help prevent tooth decay, gum problems, pain, infection, and several other oral problems.